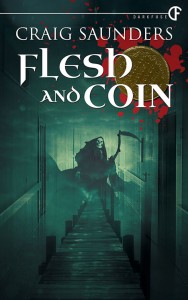 Another dark and twisted novella from must-read author Craig Saunders, with Flesh and Coin he tackles death, gypsy curses, ghosts, shadowmen, blackmail and a bit more death to finish off on, all wrapped up with a delicious twist of the ‘didn’t see that fucker coming’ variety.

Set in a Hospice, where the terminally ill come to see out their last days, there’s certainly a lot going on here and topped off by a supernatural entity ripping patients in half, deaths path shines a hell of a lot brighter.

Most are near deaths door, some are already through it, some are slightly insane, most are drugged up, some have a little bit of evil in them and couldn’t give a toss either way but every character has little quirks that make you sit up and take notice of them. Generally not overwhelmingly nice traits but definitely attention grabbing all the same.

Take our Hattie Frey, an EVIL BITCH for sure.

‘She had a kind of second sight when it came to having a laugh—she’d never been caught. Never would be. But still she was careful. Taking a quick look round the ward, Hattie winked at the dying man, whose name she couldn’t be bothered to remember.’

Hattie Frey definitely has some of the best lines in the book and she’s also got her claws into the hospices owner and good old Barty is sure to regret tapping this particular angel of mercy.

Cathy is also a nurse and she spends time at the end of her shift reading to Charlie, Charlie sees death, he saw the murder but no-one ever asked him what he saw, and it’s well worth finding out why.

Craig Saunders has a canny knack of leading you down that dark and twisted path, then with your attention subtly diverted you find yourself ripped through the underbrush at the whim of something fantastically outlandish and usually pretty dangerous. Recommended, simple as that.