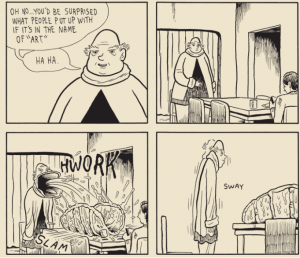 You ever watch something that made you feel gross and kind of drained for viewing it? Like Martyrs or a Serbian Movie, where you suddenly realise what started off as a horror or exploitation quickly tilted off into something much more disturbing and oddly relatable than you ever expected? Flayed Corpse by Josh Simmons is basically the comic version of that. When the book first graced this reviewers table, my initial thought was ‘oh, another indy horror created by someone whose taken too much acid,’ and in a way, that’s pretty close to what it was, but, like the previous movies mentioned, it also quickly and obviously became a metaphor for the darkest and most angst filled points of life. A sinister read that spans from funny to gross to uncomfortably relatable, this work sticks with you long after you put it down. Mix that in with a rotating style of paint, ink, pencil, and multi-coloured pages, and you got yourself a work that is as bizarre and ever-changing as the horror genre itself.

Flayed Corpse is not a single story, but a collection of horror comics throughout the past several years of the creators work. The comic goes between horror with a comedic twist, like the story of a the slasher who ends up sleeping with his randy victims while hacking off their faces to deeply disturbing, such as the story of a man who hits a kid with his car and ends up abandoning the body on the side of the road. The also comic contains a Lovecraft inspired tale about a man who drifts into a town that won’t let him leave, a story about a man who ignores the violent actions on a bridge to make it to concert, and a house with djinn in its walls and the woman who is all too willing live in it. These are but a mere selection of the weird works this title contains. Each story is self-contained and attempts to explore the various moments of a person’s existence filtered through a dark lens of irony and fear. 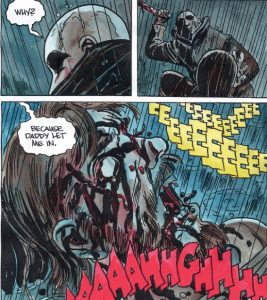 For lack of a better term, this work is weird. Intentionally weird. It’s weird to the point where most people would be turned off on the first page, especially since the first page is just a bunch of naked people spraying diarrhoea on to the walls. If you haven’t rolled your eyes yet and muttered “pretentious bullshit” under your breath after reading this sentence, than you might like the rest of the comic and if you have, no one is going to judge you. This comic is not for everyone and that’s not to infer that only those of high intellectuality will ‘get it,’ (especially since for some of the shorts there’s nothing to get), but that it gets pretty obscene in the comics. There is blood, guts, sex, violence, suicide, strange landscapes and even stranger characters. The stories will start off normal enough, a day at the beach or a trip down a dark road, and quickly begin to tilt off edge as something just isn’t right and really, that’s the rub right there. How many times have we been to the beach or driving down an empty road? How easy would it be for everything to go wrong, for one thing to completely change your perspective on life forever? That’s the real appeal of this comic. Despite its over-the-top nature, it’s easy to mirror the lessons to everyday life and how, at the base of all humanity, all we want is happiness and comfort. Or, for some, to kill our enemies and stop the voices in our heads. We are all connected by a thin string of desire, whatever it may be, and these characters will do anything to get it, even if it means destroying everything. We are these people. 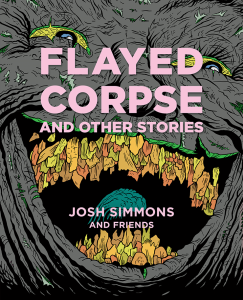 That being said, there are parts in Flayed Corpse where despite what deep and hidden nugget of wisdom the short is trying to sell, it simply gets lost in the gross-out factor. There’s only so many shit jokes a person can read before the story loses its meaning and starts bordering on a Garbage Pail Kids card. A subtler approach would’ve done the exact same job such as the story about a town constantly getting shit on and the residents are forced to shove the faeces day in and day out lest they be drowned in it and ha ha get it, it’s about life being shit! Its fourteen year old deep humour that stopped being funny in middle school. While I dig the zine vibe from including the story and trust me, I GET it, the entire work suffers from stories like this one and brings down what could’ve been a hot, indy horror title.

If you’re interested in getting lot of weird with your horror, Flayed Corpse just might be the hit for you! Mark your calendars for April 3rd or pre-order from Fantagraphic Comics.