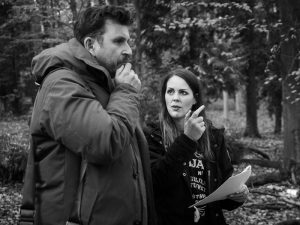 Billed by its director as a “cerebral foray into the darker more disturbing side of Science Fiction,” Salient Minus Ten is the latest genre offering from rising filmmaker and model Emma Dark, and her fourth short film to date. Ahead of the film’s trailer – promised in early 2017 – comes this cool, retro poster, which was designed by Dark herself.

Dark wrote, produced and directed Salient Minus Ten, which wrapped principal photography in November and is currently in post-production. It stars Alan Austen, in his first screen role since the mid-80s. For an actor seen primarily in uncredited, background roles A 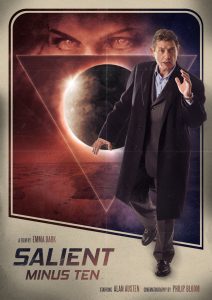 usten has some pedigree, having appeared in Raiders of the Lost Ark, Flash Gordon, and as a Stormtrooper in The Empire Strikes Back. Dark co-stars in the film, as she did in her 2015 debut Island of the Blind Dead and follow-up Seize the Night.

Dark seems to be keeping the finer points of her latest under wraps, having only released the following, rather vague synopsis:

Adam Harper is an average man.  And on an average day he suddenly finds himself catapulted into the strangest, reality changing game… A game of time and chance, where the stakes are a matter of life and death.

As well as the new poster, Emma Dark has given us these behind the scenes stills from the film’s production. Keep an eye out for the first trailer in the coming weeks.