Mike Flanagan has certainly been busy lately! The Doctor Sleep and The Haunting of Hill House director’s next project will be a feature adaptation of Christopher Pike’s 1993 science-fiction horror novel The Season of the Passage. 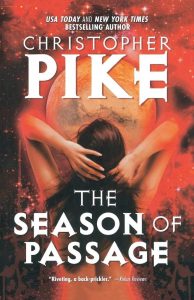 In addition to directing the film, Flanagan will co-write the screenplay with his brother, James Flanagan. Plot details are currently under wraps, but the book centres around Dr. Lauren Wagner, who becomes a celebrity after serving as the medical officer on an expedition to Mars. But this is not the first time people have gone to the planet: 10 years earlier, a Russian crew landed—and never came back. It’s unclear what happened to them… but Lauren is about to find out.

Pike will serve as an executive producer on the project, with Flanagan and Trevor Macy producing for Intrepid Pictures. This is the second Pike adaptation that Flanagan is behind; he’s also bringing Pike’s novel The Midnight Club to Netflix alongside Leah Fong.