Described, enticingly, as “Rosemary’s Baby meets Drag Me to Hell,” Blood Bound is one of the horror titles brought to the AFM by Film Mode Entertainment, who are also handling Corey Large’s hotly-tipped The Ninth Passenger. 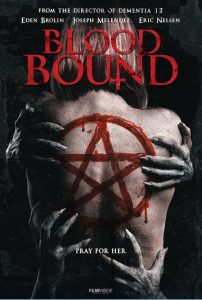 Blood Bound stars Josh Brolin’s daughter, Eden Brolin (Manson’s Lost Girls) as well as Joseph Melendez (TV’s The Sinner) and Emmy-Award Winner Eric Nelsen (A Walk Among the Tombstones). It was written and directed by Richard LeMay, coming fresh from production on his remake of Dementia 13.

“Every 25 years, it begins. Bound to an ancient pact, a family of unlimited power descends upon a small rural town to sacrifice four human lives, one being a member of their own family. Blood Bound follows six people as they carry out their destiny to their ultimate horror.”

The film is said to begin as a sinister thriller before descending into outright horror territory.

“This is a great opportunity to show people this dark, creepy film and I think people are going to be blown away by Eden Brolin’s Performance,” said LeMay at AFM.