First Trailer for The Watcher in the Woods Remake

Melissa Joan Hart may never escape the shadows of both Clarissa and Sabrina the Teenage Witch, although the former teen star could go some way towards it with her latest directorial effort, The Watcher in the Woods. 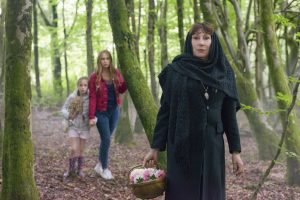 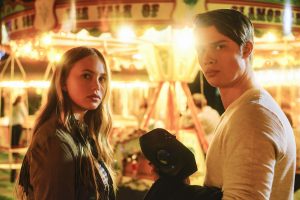 The film is a remake of the cult 1980 Disney horror which starred Bette Davis as Mrs. Aylwood, a grieving mother whose daughter disappeared years ago in the English countryside. When an American family move into a house in the woods, young daughters Jan and Ellie (played by Lynn-Holly Johnson and Kyle Richards respectively) begin to feel the long-missing girl’s presence.

Anjelica Houston takes the Mrs. Aylwood role in Hart’s film, which, going by this trailer that was released this week, looks to be taking a darker approach to the material. Hart acts as executive producer as well as director of the film, which also stars Tallulah Evans, Nicholas Galitzine, Melanie Gutteridge and Rufus Wright.

The Watcher in the Woods is an original production for Lifetime, and will premiere on the channel on October 21st.