It was only a matter of time before we were bound to see Michelle Mylett and the Social Redroom make a welcome return in a sequel to 2013’s Antisocial given the predicament we left axe-wielding Sam in at the end of the film. With Antisocial 2 all set to world premiere next week at Fantasia Film Festival the first trailer has now been unleashed on the net so get your power drills at the ready. 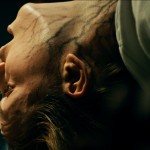 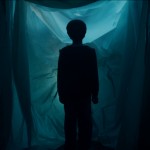 Returning to helm is Cody Calahan, who wrote the script alongside two other members of team Black Fawn, Chad Archibald (Bite, The Drownsman) and Jeff Maher (the film’s DP), and this time round we find Sam roaming a Social Redroom user-infested world some years after her newborn child was taken from her. Whilst keeping her head down from hordes of users she crosses paths with and befriends a young girl named Bean. They make a great team together but it’s not long before Sam is captured and tortured in a facility run by a medical team intent on finding a cure for the Redroom Virus. With a Redroom site update on the verge of installing itself Sam strives to escape the facility before the imminent final phase of attack. 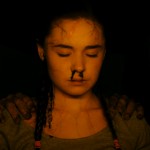 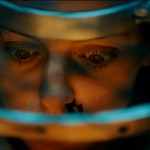 Mylett stars alongside Stephen Bogaert (The Valley Below) Josette Halpert, and Samuel Faraci (Hannibal, Hemlock Grove) and you can catch the world premiere this July 30th at the Fantasia Film Festival in Montreal, Quebec. In the meantime, enjoy the aforementioned first trailer and keep watching this space as we recently spoke with Michelle Mylett all about this highly-anticipated sequel.