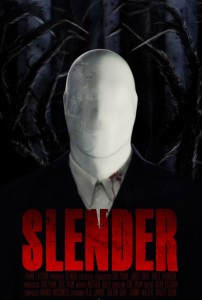 I’m sure many of you have heard of the horror game Slender Man, but for those of you who haven’t here’s a little bit of information about it: The supernatural character originated on an online forum back in 2009. Slender Man is a thin, gangly character with no face and is typically associated with traumatising people. In the games he lurks in the woods and you can spot him from your window. You have to be careful not to look at him for too long, though. Honestly, it’s damn terrifying. The tension in these games is ridiculous and be careful not to play it in the dark. Or do, if you want to be scared to the maximum.

A new trailer for the potential film adaptation Slender has been released ahead of the American Film Market Conference (AFM) later this year. It looks to withhold the sense of dread and mystery surrounding the character well and the sneaky looks at Slender Man show him just how you’d expect. Also, there’s an intriguing use of gravity manipulation which give us a little tease of Slender Man’s other-worldly powers. We think there’s a lot to get excited about here, and we hope you agree!