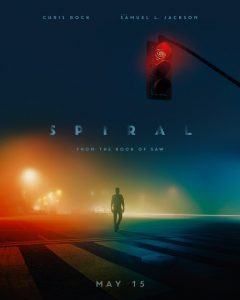 The first official teaser trailer for Spiral: From the Book of Saw has landed, and I can’t tell you how happy I am that this insane franchise still has legs (even if it is missing a few feet).

From a concept by Chris Rock, who also stars in and executive produced the film, Spiral was directed by Darren Lynn Bousman, who you’ll remember as the director of Saw II through IV, as well as Repo! The Genetic Opera. The plot centres around a grisly series of crimes committed by a killer who seems to be targeting cops… And oh yes, there will be traps.

Samuel Jackson also stars in the film, playing the father of Rock’s character, Detective Banks. No word yet on whether Jigsaw himself, Tobin Bell, will make an appearance, but we’re keeping all our severed fingers crossed.

Better start cherishing your life, because Spiral: From the Book of Saw hits theaters on May 15th, 2020. Look out for booby traps and creepy puppets and watch the teaser trailer below.