A set of chilling new stills has arrived for upcoming horror Extremity, the latest film from director Anthony DiBlasi. 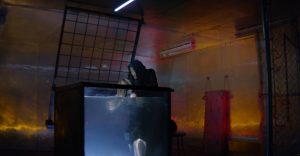 DiBlasi, who learned his craft under the guidance of Clive Barker in the horror mastermind’s production company Midnight Picture Show, followed his 2009 Barker adap Dread with a string of decent and thematically-varied horror flicks that included Cassadaga, The Missionary, Last Shift and Most Likely to Die. With Extremity, he delves into the world of ‘horror experiences’ and extreme haunts.

Synopsis:
A young woman with a severely troubled past signs up for an extreme haunt called Perdition. She believes that putting herself through Perdition’s nightmarish trials will help her exorcise her internal traumas, but has no way of knowing just how shocking her ordeal will be—or what dark secrets buried in her psyche will emerge.