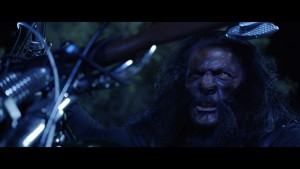 A trio of tasty images have been released from the monster movie Howlers, which is set to follow a hunter who returns from the dead to put an end to a werewolf motorcycle gang that is terrorising a small town.

The film is almost complete, which means it’s probably not long before we can get our eyes on the film that is being described as Blade meets Wyatt Earp, with a dash of John Carpenter thrown in. Hopefully a trailer will be unleashed soon. 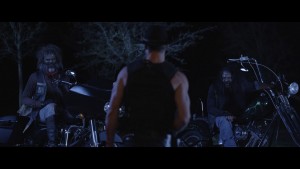 The tiny tease of practical effects that we can see in the images look pretty great and those motorcycle-riding werewolves certainly look sinister. If the film can add a healthy helping of blood, action and horror to the mix, then we could be in for a great new addition to the sub-genre. We’ve had a couple of great werewolf films lately with Howl and Late Phases; and they do say that good things come in threes.

Howlers comes from actor Josh Ridgway, who has starred in Prison Break, Earthling and Vamps, Blood & Smoking Guns. Technically, this will be his second directorial endeavour as he has the sci-fi flick The Sector – which stars Eric Roberts and Lance Henriksen – set for release later this year.

Howlers has a release date slated for 2017.