Despite shooting having been completed, the first piece of casting news is just now coming in for Saw: Legacy, the eighth instalment in the world beating gore franchise. 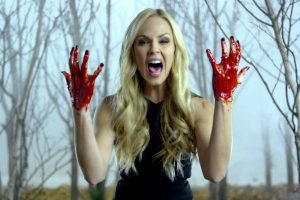 As reported by Variety, TV regulars Laura Vandervoort (pictured in Bitten) and Hannah Anderson (Shoot the Messenger) are the first cast members announced for the film, which is set to reclaim the series’ lucrative Halloween slot, hitting screens on October 27th. There is, of course the assumption that franchise star Tobin Bell will also appear in some capacity.

Saw: Legacy is co-directed by brothers Michael and Peter Spierig (Daybreakers, Predestination), and was written by Josh Stolberg and Pete Goldfinger (Piranha 3D, Sorority Row). Mark Burg, Dan Heffner and Oren Koules are on producing duties. The latter two have produced every Saw film thus far. Also returning to the series is production manager Kym Crepin, who has worked on every entry since Saw II.

Look for more casting reveals (and hopefully some plot details) in the coming months.