First Picture of Pennywise Emerges from the Depths

The first official image from Andres Muschietti’s (Mama) adaptation of Stephen King’s IT has surfaced online and it gives us another look at Pennywise. To be played by Bill Skarsgard, Pennywise is a demonic creature that can take any form. To give us the most nightmarish of nightmares, he adopts the form of a clown and lures his child victims into the sewers where he resides. 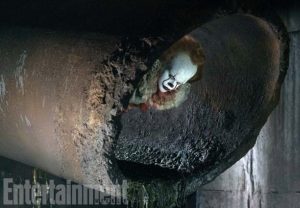 In the image Pennywise is crawling through a pipe, but we don’t really get a better look at him than in the film’s official poster. It’s a strange image, because it doesn’t look as though Pennywise is really there. Was this just a quick creation after the leaked footage over the weekend? Perhaps.

Synopsis:
In a small town in Maine, seven children known as The Losers’ Club come face to face with life problems, bullies, and a monster that takes the shape of a clown called Pennywise.