IT: First Pic of The Losers Club

With production now underway on Andy Muschietti’s adaptation of Stephen King’s epic novel It, we can get our first look at The Losers’ Club – the group of young friends who must fight an ancient, evil entity.

The children’s battle with Pennywise will take place in the first of two films, with the second seeing the group reunite as adults to destroy the evil once and for all.

While any film stills will be a long way off yet, young actor Finn Wolfhard posted this pic on his Instagram account, along with the caption “The Losers Club take Toronto”. In it, we see Jaeden Lieberher as Bill Denbrough, the unofficial leader of The Losers’ Club, alongside Finn Wolfhard as comedian-in-the-making Richie Tozier; Wyatt Oleff as Stanley Uris; Chosen Jacobs as Mike Hanlon; Jack Dylan Grazer as bag-of-nerves Eddie Kaspbrak and Jeremy Ray Taylor as Ben Hanscom. On the far right of the pic is Beverly Marsh, although the name of the young actress remains elusive. 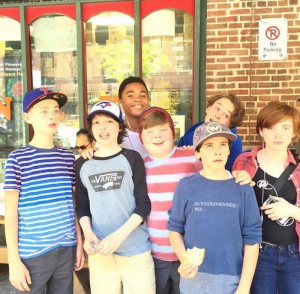 The most recent addition to the cast is Nicholas Hamilton, who plays lead bully Henry Bowers. Owen Teague will play his emotionally damaged partner in crime, Patrick Hockstetter. As I’m sure you know by now, Hemlock Grove’s Bill Skarsgård has stepped into the oversized shoes of Pennywise the Clown.

The first of the two films is expected to hit cinemas on September 8th, 2017.