The splatter-horror film BLOOD FEAST started shooting last September 3rd and Gundo Entertainment have now released the first on set images. The film is a remake of Herschell Gordon Lewis’s ultimate gore-classic of the same name and is this time round directed by Marcel Walz. The cast consists of quite the collection of horror icons with Robert Rusler (Nightmare on Elm Street II) as Fuad Ramses and Caroline Williams (Rob Zombies Halloween II) as his wife. Hollywood beauty Sophie Monk (The Hills Run Red) will play Ramses’ daughter whilst audiences will get to see Sadie Katz (Wrong Turn 6) as the corruptive Ishtar, the goddess of war, love and sex.

Other than the on set images (which you can find below) Katz had the following to share regarding her Blood Feast shoot experiences:

“I’ve worked with a lot of directors, all of whom I adore and love and feel a special relationship with but, after shooting long days for several weeks it was something so special with Marcel. I had to get to the airport at 7am and I knew Marcel had wrapped shooting for the day at 4am so I hadn’t expected to see him or get to say goodbye but he insisted on being there to take me to the airport. When we said goodbye – I don’t know how else to describe it but – you know the end of The Wizard of Oz where Dorothy says to the Scarecrow, “I’ll miss you most of all”? Marcel’s eyes are so full of emotion and hope and just pure fucking kindness and I lost it. He started to tear up. They drove away and I went into the airport and I just sat down and cried. I cried because I know how much this project means to Marcel. Never have I wanted more for a project to do so well based on someone’s purity and passion. Everyone working on the project has that same feeling and it’s because Marcel’s heart is in this and that’s what’s weird because this is the most disgusting movie ever.

It’s the weirdest, craziest project ever. It was like being in some demented fucking OZ. Sophie is so hot in this. Fans of Caroline are going to see her in a way they haven’t before. Robert Rusler does a bang up job. He really had fun with the part and is a nut in this, ripping hot, hot, hot chicks’ throats and cutting their asses… I’m running around with only a wig covering my breasts in an actual underground sex club. I’ve been in some weird places but this one tops the cake. It was the most fucked up place to shoot. This was a crazy shoot with the biggest heart and really disgusting, demented and weird. I loved it.

I hope the fans really give this one a chance because it deserves it. Marcel has a lot of surprises for fans of the original as far as the reimagining of the story. There are a lot of creative shots that I think you wouldn’t get with a big studio budget that make it really creepy and in some ways very German that I think will have American audiences kind of stoked. I just can’t wait to see how this unfolds. We did something different with Goddess Ishtar that I don’t want to give away but it changes the story in such a cool way which I’m really happy with.” 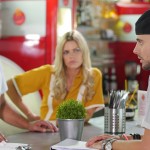 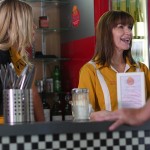 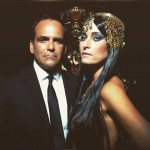