With production underway on Rob Zombie’s The Munsters, we’re keeping a close eye on the director’s Instagram, where he’s been sharing regular updates and behind-the-scenes photos. This week, he’s given us our first look at Igor, played by former Doctor Who star Sylvester McCoy!

“I am very excited to bring you all this exclusive shot direct from the set of The Munsters and announce the casting of SYLVESTER McCOY as IGOR, the loyal servant to the Munsters,” Zombie wrote on Instagram. “You may remember Sylvester as the 7th Doctor Who or perhaps as Radagast from Peter Jackson’s The Hobbit. GET READY FOR IGOR!” 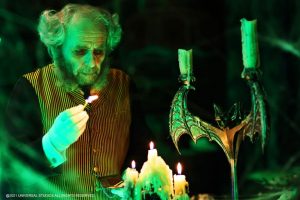 Fans of the original Munsters series from the 1960s may remember that Igor was the name of Grandpa’s pet bat, though The Munsters Revenge featured a character named Cousin Igor who served as the caretaker at Castle Dracula. In addition to McCoy, Zombie’s take on the iconic family will feature Jeff Daniel Phillips as Herman Munster, Sheri Moon Zombie as Lily Munster, Daniel Roebuck as Grandpa Munster, and Richard Brake as Dr. Henry Augustus Wolfgang. Zombie is directing the film for Universal Home Entertainment.