A bunch of new stills, plus some gorgeous artwork, have come our way for coming-of-age spooker Broken Ghost, which premiered last year at the Brisbane International Film Festival.

The film is the work of Australian director Richard Gray, who previously made crime thriller The Lookalike and 2016 survival thriller Sugar Mountain. It was scripted by Gray’s Sugar Mountain collaborator, Abe Pogos. 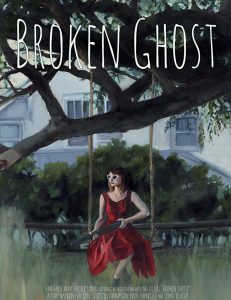 Here’s the BIFF write-up:
“On the face of it, they’re just another family moving to the wide open spaces of the Big Sky Country for a tree change. But for teenage Imogen Day (Autry Hayden-Wilson) and her parents Samantha (Scottie Thompson) and Will (Nick Farnell), the move to Montana is an escape from quite a unique kind of bullying. Desperate to make a new life for herself, Imogen must overcome new tormentors, old secrets, and a strange presence in the attic in this coming-of-age tale, wrapped in a ghost story.”

A release date for Broken Ghost is yet to be announced.