American Gods is one of the best shows airing at the moment, so if you’re not watching it yet you really should start! The show, based on the novel of the same name written by Neil Gaiman, follows a war between the old gods and the new. In the centre of the events is Shadow Moon (Ricky Whittle), who plays an ex-con and bodyguard of the mysterious Mr Wednesday (Ian McShane). The pair become travelling partners as Shadow Moon becomes slowly embroiled in a beautiful, bloody and brutal universe beyond his wildest imagination.

It’s very difficult to describe without giving anything away, so forgive me for that vague description. I adore the show for its glorious visuals that are unexpectedly reminiscent of the striking imagery and style featured in Hannibal. With Bryan Fuller at the helm, you should expect no less. 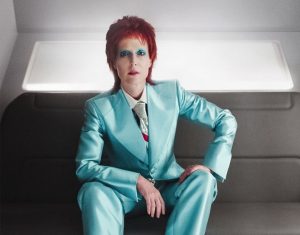 Check out the first image of Gillian Anderson as Ziggy Startdust. She plays the role of a shape-shifting god that takes on the form of whoever she deems necessary.

Episode 5 of American Gods will be available on Amazon from 29th May 2017.