Bruce Campbell (Evil Dead franchise) and Devon Sawa (Final Destination) star in the upcoming horror-comedy Black Friday, which follows a ragtag group of toy store employees who get more than they bargained for when Black Friday shoppers mutate into violent monsters—and we’ve got some first-look images to share with you! 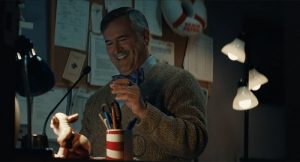 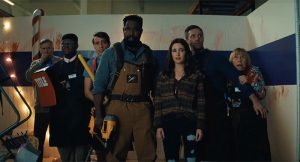 Directed by Casey Tebo and written by Andy Greskoviak, Black Friday is set to world premiere at this year’s Fantastic Fest, taking place later this month. Here’s the full description of the film from the festival:

Everyone knows Black Friday is the worst day to work in retail. Something about a good deal turns even the sanest consumer into a wild animal. But the usual chaos and violence pale in comparison to what the employees of the “We Love Toys” store must face this time around.

Devon Sawa stars as a down-on-his-luck father in the midst of divorce, lamenting his job as a low-level toy store employee. He and the other rambunctious, overworked crew of staffers are prepared for a typically exhausting Black Friday full of shoppers hungry for a deal, but they could never have expected the shoppers to turn into blood-hungry maniacs with only one goal: Come together to feed and combine their powers into something full-on Lovecraftian.

While Sawa continues his successful renaissance in the genre world with a refreshing turn as the cynical leader of the employees, it’s the inimitable Bruce Campbell who really surprises as the bumbling, uptight manager, Jonathan: a decidedly less heroic character than we’ve come to expect from him. Add in a healthy splash of outrageous gore and some ooey-gooey creature effects, and this is the soon-to-be-cult holiday horror movie you never knew you needed.