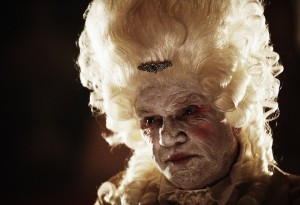 Rob Zombie’s latest feast of destruction and clowns is well under way, and he’s being ever so wonderful at slowly and steadily releasing promotional looks at the plethora of horrific characters.

We’ve got our first look at Malcolm McDowell as Father Napoleon-Horatio-Silas Murder, and he doesn’t look like a friendly face. Father Murder is the top dog of the carnival as he runs the show and it looks like he’ll take a lot of pleasure in watching his pack of clowns hunt their prey down.