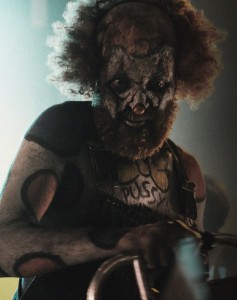 Clearly Rob Zombie has tapped into the potential that is the ever-growing fear of clowns within the masses, with the likes of his The Devil’s Rejects, but it’s his clown infested carnival film 31, which looks terrifying.

Zombie has been releasing snippets here and there from the film, and now we have our first look at one of the psycho killers, Schizo-Head played by David Ury.  The film was entirely crowd-funded by Zombie fans alike, and then picked up by Alchemy for the rights to North American distribution.

Malcolm McDowell will star as Father Murder, the owner of the sick Murder World. Panda Thomas will be the manager of the traveling road show only known as The Venus Lux Happy Time Fun Show.