The first image has been revealed of Mckenna Grace as a young Sabrina Spellman. The actress is to play a pre-teen version of the character in Netflix’s upcoming Christmas special of Chilling Adventures of Sabrina. Titled A Midwinter’s Tale, the episode will land on the streaming service on 14th December!

The teen version of Sabrina is currently played by Mad Men and February’s Kiernan Shipka. 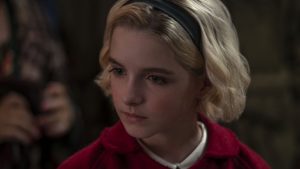 We think the casting is pretty spot-on; the two could be sisters! The series is a lot of fun, a wonderfully exciting blend of darkness and comedy that perfectly encapsulates the spirit of the graphic novels it’s based on.