Deadline has shared a first-look image from Cuckoo, the latest horror film from writer-director Tilman Singer (Luz), which just finished filming in Germany. 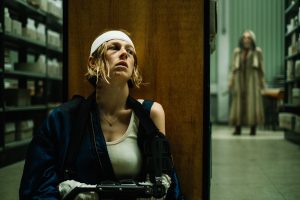 The image shows Euphoria’s Hunter Schafer, who makes her feature film debut in this movie, hiding from something sinister. Plot details are still under wraps, but could this be a slasher film? Schafer certainly looks like she’s being stalked.

What we do know for sure about Cuckoo is that it comes to us from NEON and was shot on 35mm. The cast also includes Dan Stevens (The Guest), Jessica Henwick (Underwater), Marton Csóká (Æon Flux), Greta Fernández (Embers), and Jan Bluthardt (Luz).

Cuckoo is expected to release sometime in 2023.