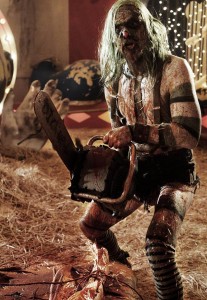 Another character image has been released for Rob Zombie’s upcoming clown-filled horror 31 and this time, it features Lew Temple as the aptly-named Psycho-Head. He definitely looks like a bit of a psycho; covered in blood and armed with a chainsaw-like weapon. There’s no chain on the chainsaw, so god only knows how Zombie is planning for it to be used. Either way, I’m excited to step in to the Murder House and to see what horrifying treats we will be greeted with.