Jenna Ortega (Scream, X) is playing the title role in the live-action Addams Family series Wednesday, and a new teaser video and image released during Netflix’s “Geeked Week” give us our first look at Ortega as the iconic character! 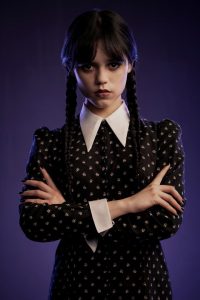 A sleuthing, supernaturally infused mystery charting Wednesday Addam’s years as a student at Nevermore Academy, Wednesday will follow the titular character’s attempts to master her emerging psychic ability, thwart a monstrous killing spree that has terrorised the local town, and solve the supernatural mystery that embroiled her parents 25 years ago ll while navigating her new and very tangled relationships.

Check out the reveal video below!