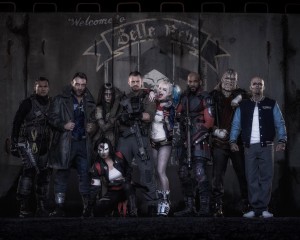 Last week we were given the first look at Jared Leto’s horrific portrayal of one of the most well known evil genuises in history, The Joker. Now we’ve been given another first look at some of the rest of the brave yet vicious Suicide Squad team.

Writer and Director David Ayer is treating us well and has released this image that shows Task Force X looking menacing and fearless, just what the Suicide Squad should be.

The photo was revealed on Twitter and stars (from left to right) Adam Beach as Slipknot, Jai Courtney as Boomerang, Karen Fukuhara as Katana, Cara Delevingne as Enchantress, Joel Kinnaman as Rick Flagg, Margot Robbie as Harley Quinn, Will Smith as Deadshot, Adewake Akinnuoye-Agbaje as Killer Croc and Jay Hernandez as El Diablo.

Obviously The Joker is missing from this picture alongside Common, Jim Parrack, Scott Eastwood and Ike Barinholtz. The shooting for the film is currently in progress and Warner Bros have said they expect a release by August 5th 2016 in 2D and 3D.

Synopsis:
A team of deadly assassins is put together in the form of incarcerated comic book bad guys. The missions they are given are from the U.S. Government and have a very low chance of coming back alive, hence their team name, Suicide Squad.