We recently laid our eyes on the first image released from Puppet Master: The Littlest Reich, the upcoming reboot of Full Moon’s cult straight-to-video franchise. Now, thanks to Cinestate, we can get our first look at the great and good Barbara Crampton in the film. 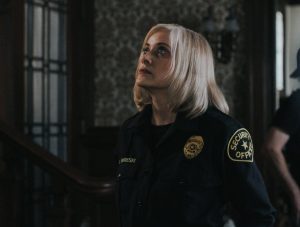 The site tweeted the pic of Crampton in character as Officer Carol Doreski who, as the actor told Scream’s Howard Gorman last year, is “…a tour guide and an ex-police officer. I was part of the police crew that brought [the original film’s ‘puppet master’] Andre Toulon down many years ago.”

The much-anticipated reboot comes from Sonny Laguna and Tommy Wiklund, the directing duo responsible for the Evil Dead-inspired splatterfest Wither and the upcoming They Cast no Shadows. It was scripted by Bone Tomahawk/Brawl in Cell Block 99 writer-director S. Craig Zahler.

“During a roadtrip to a convention for the 30th Anniversary of the infamous Toulon Murders, a comic book nerd, his new girlfriend and his best friend come face to face with a set of sadistic nazi puppets out for blood.”

The Littlest Reich stars not one but two legends of the horror genre, with Crampton joined by the inimitable Udo Kier. Also starring are Thomas Lennon, Nelson Franklin and Charlene Yi.