Described as a “darkly comedic psychological thriller set in the world of eccentric culinary culture,” director Mark Mylod’s The Menu is set to release in theatres on November 18th. While we don’t have a trailer just yet, Searchlight Pictures has shared our first look at the film and its stars, Anya Taylor-Joy (Last Night in Soho, The Witch) and Ralph Fiennes (Red Dragon). 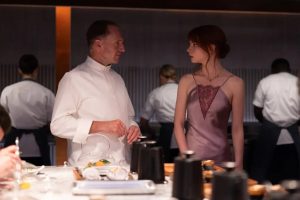 The Menu centres around a young couple (Taylor-Joy and Nicolas Hoult) who visit an exclusive restaurant on a remote island where an acclaimed chef (Fiennes) has prepared a lavish tasting menu. Will Tracey and Seith Reiss wrote the script.