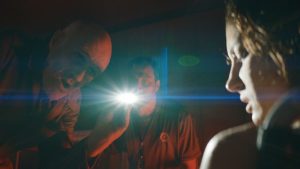 Carrying subtle zombie vibes, the film is set in a world in which a virus turns people into savage and irrational beasts. Sara and Iván seem safe in their “nest”—until Sara begins to show signs of infection and slowly transforms. Ivan is left with the question of what to do. Should he kill Sara? And how can he survive with no chance of escape?

Luciano Cáceres and Blu Yoshimi star in Nest, which is currently in post-production. Film Factory will present the first promo at 2021’s Cannes Film Market, with a release slated for late 2021.