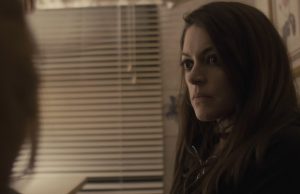 An image has been released from director Chris Etheridge’s thriller Haven’s End and it shows Hannah Fierman. You will probably recognise her from the arguably best segment from V/H/S ‘Amateur Night’. She is also set to star in the extended feature version, titled SiREN from director Gregg Bishop, who directed the V/H/S Viral segment ‘Dante the Great’.

Haven’s End follows a family who seek refuge from a terrorist attack in Georgia, but the property they seek shelter in is anything but safe. The cast additionally stars Catherine Taber (Star Wars: The Force Awakens) and Megan Hayes (The Hunger Games franchise).

According to Etheridge, the film is a thriller in a similar vein to John Carpenter’s classic paranoia chiller The Thing, so that sounds appealing. Haven’s End has a release date slated for some time this year, so keep an eye out for a trailer soon.