Hot off of Color Out of Space and Mandy, Nicolas Cage is starring in another horror movie, Wally Wonderland, and the first image from the project is here. 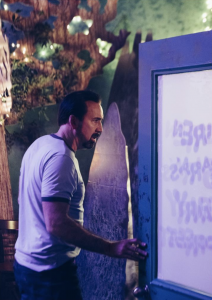 Directed by Kevin Lewis and written by G.O. Parsons, the film sees a drifter (Cage) getting tricked into a janitorial job at a condemned amusement park, the titular Wally’s Wonderland. But the drifter is quickly plunged into a fight for survival against the park’s possessed animatronics.

Emily Tosta, Beth Grant, Ric Reitz, and Chris Warner also star in the film, which was shot in Atlanta, Georgia.