It was way back in 2010 when Guillermo del Toro expressed his interest in developing a horror project for kids and, a few years later, his wish has been granted with Trollhunters. Trollhunters will be arriving on Netflix later this year, courtesy of DreamWorks and follows the residents of Arcadia as they discover a whole new world below their own.

When speaking about the series del Toro said, “It essentially combines fairy tales with modern times and is about how difficult it is to be kid. Normally, kids are idealised in animated films. But the growing pains, married with the notion that there is a world right next to us that is completely plagued by creatures of ancient lore, it’s thematically fitting with the rest of my stuff.” 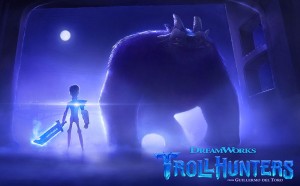 Introducing children to horror early is definitely something we recommend – as long as you’re not showing your 3-year old The Human Centipede or A Siberian Film, of course. Horror, animation and family-friendly are 3 words that go surprisingly well together, with films like A Nightmare Before Christmas, ParaNorman and Frankenweenie proving that it’s OK for kids to be scared, too. Plus, there is plenty for adults to enjoy.

Trollhunters will be arriving on Netflix later this year.