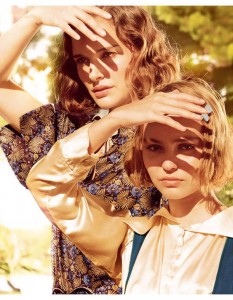 The first image has been released from Planetarium, a ghost drama set in the 1930’s that stars Natalie Portman and Johnny Depp’s daughter Lily-Rose Depp as sisters. The pair look surprisingly alike in the image; both sporting similar wavy light hair and even their eyes show a striking resemblance.

Synopsis:
Follows the journey of sisters who are believed to possess the supernatural ability to connect with ghosts. They cross paths with a visionary French producer while performing in Paris.

Hot off the heels of Kevin Smith’s Yoga Hosers, Lily-Rose is fast following in her father’s footsteps as she makes a name for herself in the acting world. Despite Yoga Hosers receiving mediocre reviews, it is not her acting skills being criticised. It will be interesting to see whether the young actress shines alongside Natalie Portman, or if she will be cast in the shadow of Portman’s always magnetising screen presence.

Planetarium will be released in May 2016 and comes from director Rebecca Zlotowski.