The first image has been released from Patient Zero which promises to revive the dying zombie genre by doing something a little bit different.

Synopsis:
An unprecedented global pandemic of a super strain of rabies has turned the majority of humankind into highly intelligent, streamlined killers known as “The Infected.” One victim, Morgan (Matt Smith), who is asymptomatic and can communicate with the infected, leads the last survivors on a hunt for Patient Zero and a cure. 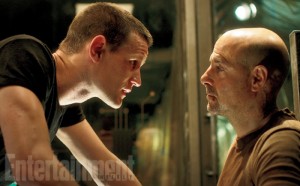 When speaking about Patient Zero, the film’s director, Stefan Ruzoitzkyn said, “The great days of zombies are a little bit over. It’s time for something new” He describes “the infected,” – don’t call them zombies! – as “much sexier […] They have a lot of energy, they’re fast, they’re good-looking. Not those walking vegetables.” Does anyone else remember when Twilight tried to make vampires a bit sexier and ended up covering them with glitter? Perhaps it’s time for sparkly zombies!

Check out the image from Patient Zero below which gives us a glimpse at Matt Smith and Stanley Tucci’s characters. The film will be released on 2nd September 2016.