Haifaa Al-Mansour (Wadjda), the first female filmmaker from Saudi Arabia, is bringing one of the most prolific female authors to the big screen: Mary Shelley, the creator of Frankenstein. Titled Mary Shelley, the biopic will star Elle Fanning in the title role and you can check out the first image of her below. 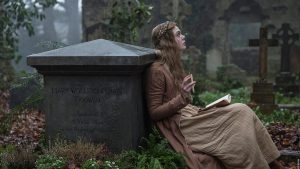 The film is going to be more of a romantic drama than a horror, following the love story between the poet Percy Shelley and Mary Wollstonecraft Godwin. However, as she is behind the creation of one of the most classic, monstrous stories of all time, it would be wrong of us to ignore it.

Elle Fanning was most recently in Nicolas Winding Refn’s striking horror film The Neon Demon, the critically acclaimed 20th Century Women and Ben Affleck’s exciting, but disappointing Live By Night. As well as Mary Shelley, she will be starring in Sofia Coppola’s promising The Beguiled and thriller Beware That Girl.

Mary Shelley is currently looking for buyers at the European Film Market in Berlin, so keep your eyes peeled for more as it comes.