Ash Vs Evil Dead will be returning to our screens this autumn and we have the first image from Season 2 to share with you. Ash (Bruce Campbell) and his loyal deadite-slayers Ruby (Lucy Lawless), Kelly (Dana DeLorenzo) and Pablo (Ray Santiago) stand tall and steady as they brace for more killing in the new season. 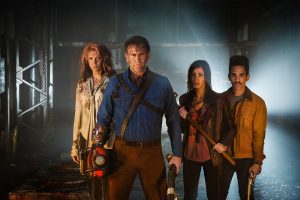 We loved the first season of Ash Vs Evil Dead; it kept to the tone of the Evil Dead films as it was packed full of gore and humour, so we can’t wait to see more of Ash and co. in action! In the new season we have been promised a meeting with Ash’s father Brock Williams, who is to be played by Lee Majors. Ash’s childhood best friend Chet Kaminski will also be introduced and he is to be played by Sam Raimi’s brother Ted Raimi.

If you haven’t seen Ash Vs Evil Dead season 1 yet, then there is still time to do so. The first season heads to home video next month, which gives you a few weeks to binge watch the show before season 2 hits our screens.

Ash Vs Evil Dead season 2 will consist of 10 half-hour episodes and will air later this year.