Leading British Horror Magazine Horrified has today announced its first Horrified Film Festival is to be held at the Hebden Bridge Picture House in West Yorkshire on Saturday 11th June, 2022.

The festival will be a day-long celebration of all things British horror, with special guests, Q&As and, of course, screenings. 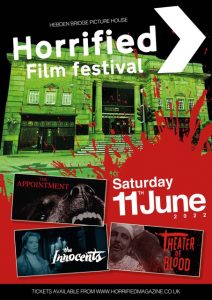 Films shown will include the widely acclaimed 1961 classic The Innocents, starring Deborah Kerr, regarded as one of the greatest ghost stories ever told, and a true classic of supernatural cinema. The festival will also bring to the big screen the 1973 outrageous classic Theatre of Blood which starred Vincent Price alongside a cast list that reads like a who’s who of Great British actors.

Horrified owner and Editor in Chief Jae Prowse said “We are very excited about the first Horrified Film Festival, it’s a unique event that offers fans a great chance to come together to celebrate British horror, past and present, and see some classics and rare films on the big screen”

The Horrified Film Festival also has world exclusive – unseen on the big screen in the UK for over 30 years, the 1981 horror film The Appointment, starring Edward Woodward. The film has been restored by the BFI as part of its Flipside series. Curators and archivists William Fowler and Vic Pratt, alongside restoration expert Douglas Weir from the British Film Institute will attend the film festival discuss the film and their work.

For more information and to purchase tickets visit www.horrifiedmagazine.co.uk