The first footage for the animated series Constantine has been unveiled at New York Comic-Con and it showcases some of the show’s action and the laidback, cool attitude of Constantine himself. Constantine is voiced by Matt Ryan, who plays the same role in the live action series developed by David S. Goyer for NBC.

In the animated series…

Armed with an arcane knowledge of the dark arts and a wicked wit, he fights the good fight. With his soul already damned to hell, he’ll do whatever it takes to protect the innocent. With the balance of good and evil on the line‎, Constantine uses his skills to face the supernatural terrors that threaten our world and send them back where they belong. After that, who knows…maybe there’s hope for him and his soul after all. 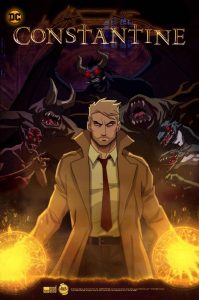 As NBC’s Constantine series was cancelled after the first season it’s exciting to see that the character has not entirely died a death. Animation will give this new series the opportunity to push things even further and, if this footage is anything to go by, it’s certainly not going to be for a young audience.

Constantine will air on CW Seed in 2018 and will be executive produced by David S. Goyer, Greg Berlanti and Sarah Schechter.