First, Blood Drenched Image from A Good Woman is Hard to Find

British director Abner Pastoll made a strong impression with his 2015 horror thriller Road Games, which starred Barbara Crampton and became something of a festival hit. After filming a couple of shorts between then and now, he’s back with another horror feature, entitled A Good Woman is Hard to Find. While a release is currently being worked out for next year, you can get your first glimpse of the film with this still, the only one released so far. 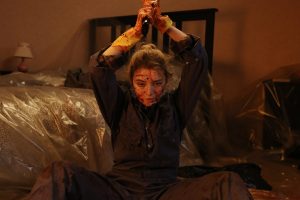 Synopsis:
“Sarah is a recently widowed young mother. Her son Ben has been an elective mute since the day he witnessed his father being knifed to death on their estate. Police have done nothing to catch the killer, categorizing his death as a falling out amongst thieves. Then Tito literally bursts into Sarah’s world. He’s ripped off drug-dealers and decides to stash the stolen drugs in her flat. Frightened senseless, Sarah wants nothing to do with this but caught between a rock and a hard place, she sees an opportunity to use Tito to gain information about what might have happened to her husband with the hope of eventually returning to some semblance of a normal life.”