First Behind The Scenes Look At Mulder & Scully In X-Files 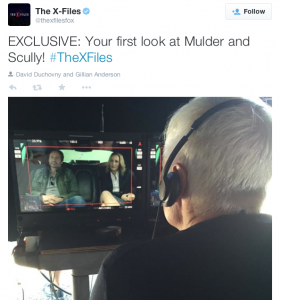 Production of the X-Files resurrection has started and so have the behind the scenes pictures. The official Twitter page for the show has been trying to get everyone excited and tweeted the first look at horror partners in crime Mulder and Scully.

Although the picture isn’t the most exciting, it proves that filming is well underway and reminds us that it won’t be that long until our favourite sci-fi show is back. Now that the first image has been leaked there will only be more pouring in now.

Mulder and Scully are back doing what they do best – working to solve some of the most complex and disturbing cases. We will keep you updated with any more news from the set of X-Files. The new season will start on Fox on January 24th 2016.