First All Singing All Dancing Trailer For Alleluia! The Devil’s Carnival 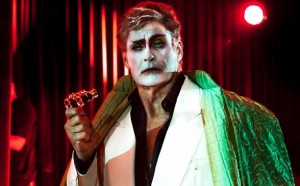 There’s something ever so fun and enticing about a horror film that’s a musical – the world could definitely do with more of those. Fortunately for us Darren Lynn Bousman, the manic mind behind Repo! The Genetic Opera and The Devil’s Carnival: Episode One, has unleashed a trailer for his latest film Alleluia! The Devil’s Carnival.

Bousman and writer Terrance Zdunich have been praised as cult filmmakers for their inventive musical horror films. Alleluia! The Devil’s Carnival follows the story Lucifer as he tries to destroy Heaven, which only ends in a bloodbath for both.