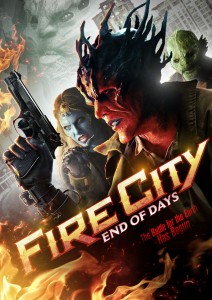 Set in an unnamed American city, this is a very interesting movie. The premise is this – a group of demons are living in a rundown tenement building. They live side by side with the human inhabitants, junkies, wife and husband beaters, pedophiles. This is handy, because the demons feed of the misery and negative emotions of the humans, so it is in their interest to keep them in this state. Then one day, something happens and the humans are suddenly no longer in their pitiful state, and the demons start starving to death.

All in all it has a very Clive Barker feel about it – demons living cheek by jowl with unsuspecting humans is his stock and trade, after all. I expected and hoped it would lose the Barker feel and become its own thing, but it doesn’t. Right until the end, it feels like it could have been plucked from The Books of Blood, or be some unofficial sequel to Nightbreed.

In the beginning, things are a bit confusing. It takes a while for the plot to click into motion, for example. And if this all sounds negative, it’s not meant to be, because this is a very good movie. 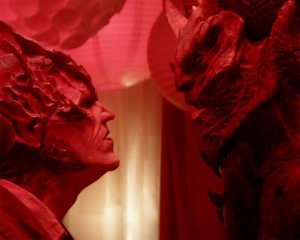 First off, the SFX make-up is as good as anything I have seen. The designs of the demons are lovely (if that’s the right word in these circumstances!). The main demon character, Vine, is an amazing design.

This is not a big budget movie, and it only betrays that a couple of times. Something else that can ruin a low budget horror movie is acting. Sometimes, when all the cash is spent on the incredible effects, there isn’t much left to hire decent actors. I’m happy to say that it’s not the case here. Tobias Jelinek, how plays the aforementioned Vine, has a lot to do, and carries most of the movie, but he has the acting skill to do so. Also worthy of mention is Keely Aloña, who plays Sara, the child who proves very important to the plot. 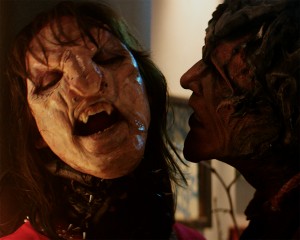 Ah, the plot. I guessed most of what was going on at the beginning, but there’s also a nice twist in there that I didn’t see coming. I also enjoyed the moments of dark humour in there. Witness the scene when a female demon tries to seduce a now painfully normal couple, for example.

If I’m honest, I didn’t expect much coming into this movie, but I was pleasantly surprised. A pleasingly horrific movie, and one with its brains still intact.