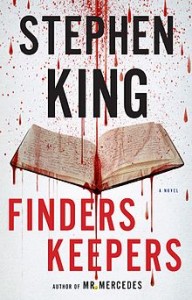 Finders Keepers is the second book of the Mr Mercedes trilogy and also the name of the private detective agency formed by Bill Hodges and his new assistant Holly Gibney. Along with Jerome Robinson, all responsible for catching the killer Mr Mercedes, they agree to investigate a new case from a most unlikely origin in the schoolgirl pal of Jerome’s little sister.

The opening chapter starts over 30 years ago and ends with an alarming bang. Morris Bellamy and two accomplices set out to rob author John Rothstein, author of the Jimmy Gold trilogy, unhappy with the retired Rothstein’s treatment of Gold, Bellamy sets out to put things right in true psychotic fashion. He comes out of it with Rothstein’s notebooks, two unpublished Jimmy Gold stories and a shitload of cash. Bellamy cleans house but before he can read the stories, he’s arrested and sentenced to life inside, for an entirely different crime.

When Mr Mercedes ploughed his stolen car into a group of people, young Peter Saubers father Tom, was one of the victims. While playing behind their house Peter finds buried treasure in a casket, some beautiful moleskin notebooks and a pile of cash, he anonymously sends the money to his struggling parents and things start to look up for the family. The money eventually runs out and Pete is left with the literary equivalent of a gold mine but how does he sell those notebooks without arousing any suspicions and staying out of harm’s way.

Just as things start to come together, as things sometimes do, a stutter in his plans begins to manifest, he’s in well over his head now and it’s all going to come down on top of him. Especially when Morris Bellamy finally gets parole and with just the one thing on his mind, Jimmy Gold.

The two plot threads of Peter Sauber and Morris Bellamy intertwine and get closer and closer, one determined old man and one young boy with his sister’s education at the forefront of his mind. They will meet, one a stranger to violence and evil, the other a fleeting accomplice to it but about to do anything and everything to get what he wants. And when our three heroes enter the fray, when the stakes are high, Stephen King wraps you round his little finger and ratchets the tension unbearably as we bounce from character to character and the chase is really on.

Just like Mr Mercedes, Finders Keepers is an exemplary character driven thriller, even when you stand back and think to yourself, not a massive amount happened there, not much in the way of unforeseen twists but what the King does, is not just get you invested in the characters. You’re literally infected with them all, immersed in them, imbued with them completely, I can appreciate atmosphere, world building, plot, they all go to building a story but characterization is the thing that makes a story real for me. And this is perfect from the young boy to the old killer and the characters we already know from the first story.

Hodges is a retired police officer, he’s not going to be running around catching bad guys and if he was to chase the bad guy Morris Bellamy, then you’re likely to get the slowest hundred metres world record followed by heart attacks all round but it’s not about that. It’s not so much an action orientated thriller. The story is set up perfectly, until it’s time to start playing with your nerves, squeezing the tension with quick fire chapters, ripping between Hodges, Bellamy and young Peter, taking your breath until you can’t put Finders Keepers down.

I thought they were all brilliant from Hodges to the quirky Holly Gibney and young Peter, flitting from calm to panic in the blink of an eye. And Mr Mercedes himself, there in body, for now. This certainly isn’t horror but there’s a glint of the supernatural that could well come into the following book and I for one loved it, and to end on a quote from Jimmy Gold himself ‘shit don’t mean shit’ it just means everything.