Find God with Rural British Creeper The Devil Outside

UK company Protagonist has bought the sales rights to gritty, low-budget British crime-horror The Devil Outside, from which this first image was recently released.

The BFI have backed the recently-wrapped film, which comes from writer/director Andrew Hulme (pictured), following up his 2014 Cannes Official Selection debut Snow In Paradise. His new film plays on themes of religion, working class deprivation and macabre childhood curiosity.

Caught between his mother, who’s determined to bring Jesus’s love to a dead mining town, and his best friend who has introduced him to teenage rebellion, Robert becomes embroiled in a spiritual tug of war as he tries to escape his religious beliefs. It’s then that he discovers a dead body in the woods and realises that God has sent him a sign. 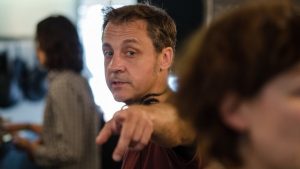 The Devil Outside was shot over five weeks in rural parts of Nottinghamshire, with a cast made up mainly of new and unknown actors from around the area, including Daniel Frogson, Lauren Stanley and 14-year-old Noah Carson as Robert, cast via Nottingham’s Television Workshop.