It Finally Comes to Blu-Ray this October

It has been over 25 years since It found its way to the small screen back in 1990 and now, finally, it is heading to Blu-ray in a special collection that includes a t-shirt. That means you can express your love for Pennywise with a swanky piece of attire. 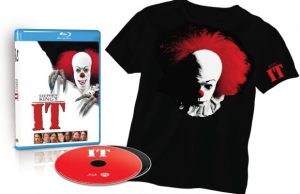 Synopsis:
A malevolent force in a small New England town takes the shape of a clown, but he’s not clowning around. Instead, he terrifies youngsters and brings some to their untimely doom – until some wily kids fight back. The evil resurfaces 30 years later: meaner, angrier, deadlier. And friends who vividly remember youthful terrors reunite to battle It.

With the upcoming remake it makes sense that the original get its deserved place in high-definition. We aren’t certain of what special features the collection will include, so keep your eyes peeled for those when they are announced.