With Stranger Things returning to Netflix in just a couple of days, the streaming service has put out one (presumably) last poster for the much anticipated second season of the hit show. The artwork brings together much of the imagery seen throughout season 2’s marketing, with weird-looking pumpkins, that giant spider monster seen in the first trailer and Noah Schnapp’s Will Byers at the centre of it all. 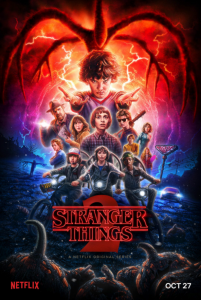 Taking place almost a year since the events that ended Season 1, Stranger Things’ second outing sees Will rejoin his friends after his trip to the Upside Down, although he’s not been left unscathed, and an entity far bigger and more devastating than the Demogorgon threatens the town of Hawkins.