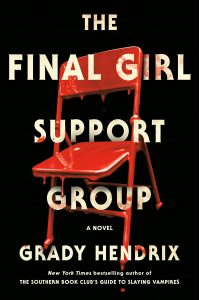 Grady Hendrix’s latest horror novel, The Final Girl Support Group, has only been on shelves for a few weeks, but a series adaptation is already in the works over at HBO Max. What’s more, Charlize Theron will be producing the project alongside Andy and Barbara Muschietti (It, It Chapter Two), with Andy Muschietti on board to direct the pilot episode.

The series comes to us from Denver & Delilah Films, Double Dream, and Aperture Entertainment. The novel centres around Lynette, a real-life final girl who survived a massacre. For more than a decade, she’s been meeting with five other final girls and their therapist in a support group for those who survived the unthinkable, working to put their lives back together. Then one woman misses a meeting, and their worst fears are realised: someone knows about the group and is determined to rip their lives apart again, piece by piece.

But the thing about final girls is that no matter how bad the odds, how dark the night, how sharp the knife, they will never, ever give up.