Franchise creator and executive producer Kevin Williamson has revealed the official title for the upcoming fifth film in the Scream franchise. Following in the confusingly titled footsteps of Halloween (2018), the sequel will simply be called Scream. 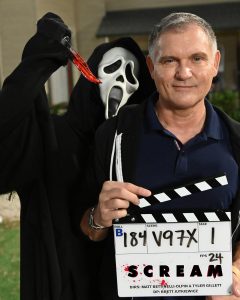 “That’s a wrap on Scream, which I’m excited to announce is the official title of the next film!” Williamson wrote on Instagram. “Nearly 25 years ago, when I wrote Scream and Wes Craven brought it to life, I could not have imagined the lasting impact it would have on you, the fans. I’m excited for you to return to Woodsboro and get really scared again.”

Scream is directed by Matt Bettinelli-Olpin and Tyler Gillett, the filmmaking duo behind Ready or Not. Among the returning cast are Neve Campbell and Courtney Cox, pictured in a behind-the-scenes shot from Williamson. David Arquette and Marley Shelton are also returning, and new faces include Melissa Barrera (In the Heights), Jack Quaid (The Boys), Jenna Ortega (The Babysitter: Killer Queen), Kyle Gallner (The Cleansing Hour), Dylan Minnette (Don’t Breathe), Mikey Madison (Once Upon a Time… In Hollywood), Jasmin Savoy Brown (The Leftovers), Mason Gooding (Booksmart), and Sonia Ammar. The script was written by James Vanderbilt (Zodiac) and Guy Busick (Castle Rock). 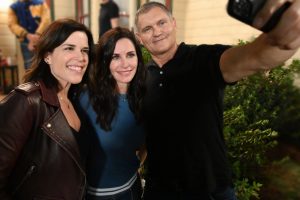 “I believe Wes would’ve been so proud of the film that Matt and Tyler are making,” Williamson added. “I’m thrilled to be reunited with Neve, Courteney, David and Marley, and to be working alongside a new filmmaking team and incredible cast of newcomers that have come together to continue Wes’s legacy with the upcoming relaunch of the franchise that I hold so dear to my heart. See you in theatres January 2022.”