The list of special features for The Exorcist III, which includes both the theatrical and Director’s Cut of the film, are as follows: 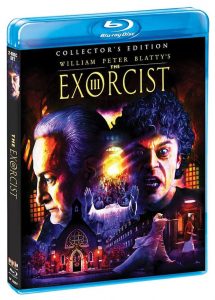 The Exorcist III is a rare breed of horror that proves the third in the franchise can actually be pretty decent. Obviously, it’s not a touch on the original, but there are plenty of chills and thrills in this one. You can pre-order Scream Factory’s The Exorcist III right now, and it will be released on 25th October 2016.