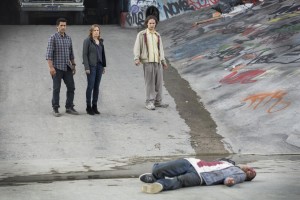 Not only have AMC released a brand new clip from upcoming The Walking Dead spin-off show Fear The Walking Dead, but they’ve also announced how the zombie-depraved in the UK can tune in too.

The clip questions the reality of whether or not the authorities would really inform us of an outbreak that could cause the end of the world, and our educated guess is no. Watch the video and decide for yourself.

What is really exciting us is the announcement that AMC will be launching in the UK this September! It will be exclusively available to BT customers through a multi-year deal, so you might want to change your provider. Fear The Walking Dead will then premiere on BT TV in the UK.

AMC UK will also premiere many of their other popular drama shows along with some of the most highly acclaimed films.

Fear The Walking Dead focuses on the events leading up to the zombie apocalypse and how the days surrounding the outbreak develop. We will see the panic and shear terror felt during a time when the world was disrupted, in chaos, and no one knowing what was happening.

Starring in the show is Elizabeth Rodriguez (Orange is the New Black) as Liza, Mercedes Mason (Quarantine 2: Terminal) as Ofelia, Kim Dickens (Sons of Anarchy) as Madison, Cliff Curtis (Missing) as Travis, Frank Dillane (Harry Potter and the Half Blood Prince) as Nick and Alvcia Debnam-Carey (Into the Storm) as Alicia.

The first series will consist of six hour-long episodes, and a second season will premiere in 2016.